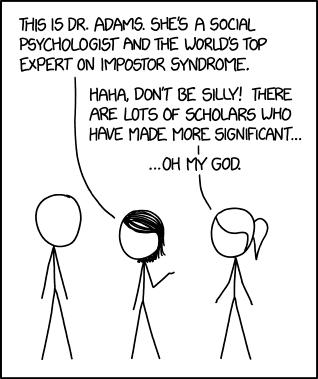 Just a quick reminder: you got this.

Regardless of how many mistakes you’ve made, how many plans have gang aft agley, you got far enough to where you have the resources to read a computer blog. That means access to technology, the free time to explore non-essential content, and a desire to read about personal development because even though you’ve got these things, you still want to do better.

I’m not saying you’re more worthy than people who don’t have those things. I’m saying that, whether you pulled yourself up by your mythological bootstraps or were handed these luxuries on an equally mythical silver platter, you’re doing pretty good.

Give Yourself a Little Credit

Thing is, most of the people I know (including myself) have been raised in a culture of “You’re not doing enough. Doesn’t matter what you’ve done, doesn’t matter what other people say. There’s always this voice inside that says “Yeah, but…” and then goes on to paint some hypothetical world where one thing that seemed to not be quite as intended was as intended. That voice — usually the remnant of some well-meaning (or not) parent who was “just trying to push you to your best”— is abusive. Plain and simple. It is a vampire of joy, a useless and worthless artifact of misguidance.

If you’re waiting for me to tell you how to make the voice shut the frak up…well, if I’d done a better job researching this subject, I probably could have, but I’m not a real blogger, just a hack, so this probably isn’t going to help anybody at all because no one really reads these things anyway and why would they…

Just kidding. It’s actually rather easy to do.

It’s just a twist on the Golden Rule:

Do Unto You as You Would Do Unto Others

Now, I’m making something of an assumption: I’m guessing that, if you are reading a blog that’s about “love” you have some motivation to try and be a compassionate and caring person. The kind of person who, if you saw them do something incredible — or even just “ok” — would encourage and support and compliment them.

If you’re one of those other kinds of people — the ones who look for some flaw, for some way it could have gone better — there’s a really nice story about a mote and a beam that you need to meditate on. For a few years.

But we’re going to say you’re a nice person. And your friends love sharing things with you, because you smile, pat them on the back, send emojis and do Bart Simpson “Woohoo!” impressions when they do.

That’s how you shut up that voice inside. Literally interrupt it. You know, that green doesn’t really go with — “Wow! I completed this design! ON TIME! And it looks great!” The teacher took that yoga pose deeper and isn’t puffing and wheezing— ”I showed up on the mat AGAIN! Way to go, me!” You know, other people your age have— My goodness. Everything I’ve been through, all the reasons I should not have gotten where I am, and LOOK at where I’m at!

If you need to, change those to second person, because that’s what you’re doing. You’re pretending your friend is putting themself down, and countering it. Except, in this case,your friend is you.

It’s possible that you’re thinking “well, that sounds proud and aggrandizing”. Ok, let’s be real, most people don’t use the word “aggrandizing”. It makes it sound like you’re “full of yourself”, though, doesn’t it?

Seriously, how does that statement make any sense? Of course you’re full of yourself — and you’re, as noted at the beginning of this post, doing pretty damn well. Enjoy the fullness! Lucky you!

And can I tell you: knowing that someone of such high quality as yourself is reading this blog…well, that makes me feel pretty darn good. Maybe I’m writing something worthwhile after all.