The Writer’s Life for Me! 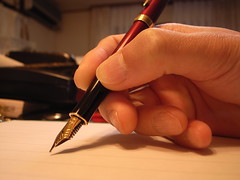 Recently I set a goal for myself. It was a fairly arbitrary goal: I wanted to get seven different pieces accepted for publication in one month. This isn’t as far-fetched as it sounds; I’ve had individual pieces accepted fairly regularly, and this was just upping the ante by focusing my efforts. It had a side motivation which was that if I could successfully sell seven stories (say that 5 times fast!) I would be paying my rent with writing. Putting a roof over my head with nothing more than the words my brain created. That, my friends, is job security.

I found several publications that had “calls for submissions”. I laid out a calendar grid of each story’s deadline. The month started, the month when I was going to be “Mr. Productive Writer.”

I love writing, especially when I can sit down and just plug into the muse. I start typing, the words flow and the ideas churn and an hour or two later there are several thousand words on my screen. Some of them are even worth keeping! This goal I’d set would be an easy way to turn “doing what I love” into “doing what supports me.” It’s the dream of every creative, right?

Since I’m a writer, I’ve thought long and hard about how to exactly describe for you what it was like trying to write under that schedule. Pay attention, now, this is my craft and my art:

Other phrases come to mind – “It was like chewing razor blades,” I told one of my partners. I got one story done and submitted it, and started a second, and had rough outlines for a third and fourth. But it was immensely difficult to get any traction. Suddenly it was work. There was no flow.

Right about the time the first story was rejected, about two weeks into the project, I made a realization: I enjoyed writing this kind of thing, occasionally. But I’d basically fallen into it – someone had said “Hey, you’re a good writer, ever think of submitting an article to this magazine?” The key element was this: I didn’t think of it first. It was externally motivated. When the editors told me how much they loved my work, how much they wanted to see more, I had enjoyed the flattery and attention. It was something I was capable of doing, but not something I was passionate about.

I rarely read their magazines. Or even related books on the subject. I wasn’t a fan.

Many years ago, when I was still trying to make my first marriage work, I remember the frustration of telling myself “You should just be happy with what you have.” I tried to point out to myself all the reasons that the marriage could work, all the things that I hadn’t yet tried, all the “shoulds“.

It never worked. It reached a point where I couldn’t look myself in the mirror because that man there had an accusing glare of “you are lying to me.”

Setting up this project for myself was a microcosm of that same kind of lie. I told myself I should be passionate about this project because it could pay my rent! Because people would tell me I was a good writer! Because I would get rich and famous and…and…and…

You can’t fake passion in the secret rooms of your soul. You know when you are fooling yourself, and the best you can do is ignore that knowledge for as long as possible.

I cancelled the project. I started looking at the magazines I did read, at the books I do feel passionate about. Gradually I am coming around to the opinion “I could do that. And in some ways I can do it better.”

There’s a part of the spiel I do at the start of every Open Space where I’m trying to trigger the generation of topics for the day’s agenda. It goes something like this:

Forget wishes. Forget shoulds. Passion is another word for love, and love is easy: you either love something, or you don’t. You know the answer. So have the courage to be honest with yourself.

This is your passion. This is what you love. You deserve it.